The 3-year project “Improving the commercial aquaculture feasibility for Yellow Tang (Zebrasoma flavescens): Resolving early bottlenecks to improve culture yield” aims to improve the commercial feasibility for producing high-value species such as Yellow Tang. Specifically, this project is addressing key bottlenecks affecting larval survival. Overcoming these bottlenecks will improve the culture efficiency and reduce the total cost of production. This will in-turn, increase the likelihood of industry adoption of this technology and enhance the aquaculture industry in the region.

The first objective of the project is to maintain robust Yellow Tang broodstock populations to ensure reliable, and year-round, supply of eggs for research. Oceanic Institute is currently housing (3) groups of wild yellow tang broodstock.  The first group is comprised of (6) fish that were acquired in 2001. The second group is comprised of approximately 20 fish that were acquired in 2005. The final group of approximately 25 fish was acquired in 2014.  All three groups have been spawning regularly, with monthly peaks around the full moon. Combining spawns from these groups, we have been able to routinely obtain over 30,000 viable eggs per day to stock hatchery tanks.  During peak spawning events in early Fall (2018) we were able to obtain over 75,000 viable eggs in a single day. We anticipate spawning will continue and should further improve as the most recently collected group becomes more established.

The second objective of Year 1 was to evaluate the onset of maturation and assess reproductive performance in existing F1 generation Yellow Tang broodstock. In 2015, we were able to (for the first time ever) successfully produce Yellow Tang juveniles. Those F1 fish were 3 years old at the onset of the current project (settled in October 2015). We began seeing spawning behavior just prior to the onset on this project and observed the first fertilized spawns in October of 2018. Over the reporting period, these fish (approximately 35 total) continued to spawn monthly, and we are routinely seeing daily viable egg production in the low thousands. We expect this spawning to improve as the fish age and grow and are encouraged to see that regular spawns persisted throughout the year as with the wild fish.

It is important to note that although the spawning performance is not yet matching wild broodstock, the onset of spawning occurred much more rapidly. In prior years, it sometimes took 5 years or more for wild stocks to begin spawning in captivity and to obtain viable eggs. We suspect that once the F1 group really comes into maturation, we will see excellent spawning performance from this group. We are also pleased to report that in July of 2019, we had a second group of F1 Yellow Tang begin spawning. These fish were produced in 2016, and were about 3 years old at the onset of spawning (as with the previous group). Egg production from this group will begin to be monitored and compared to that of the other F1’s and wild-collected fish.

To compare the hatchery performance of larvae from F1 broodstock to larvae from wild stocks (Objective 3), Yellow Tang eggs were collected from both F1 and the three wild groups (eggs were combined from wild groups) of broodstock in June of 2019. Replicated 200L tanks (n=3) were stocked with 3,000 eggs each from the two treatments (wild or F1). The larval tanks were maintained according to established protocols outlined in Callan et al (2018) for seven days. On day seven post-hatch, the remaining larvae in each tank were counted to assess differences in survival between the F1 and F2 larvae. Unfortunately, survival in both treatments was far less than expected at approximately 4% and 2% in the F1 and F2 groups, respectively (Figure 1). 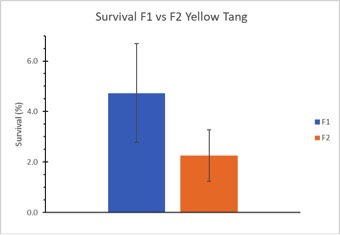 This low level of survival was not expected, as in the past we routinely observed survival of about 25% to day 7 (from wild broodstock).  We also would have expected survival to be a little higher in the F2 larvae (than in F1’s), as their parents experienced heavy selection pressure to survive in hatchery conditions. However, it is very likely that the F1 broodstock egg quality was not as good as could be realized with more conditioning. This was later confirmed by examining survival to yolk-sac exhaustion (day 3) where we observed the majority (>70%) of this group’s larvae were not surviving past his pre-feeding phase.

The low survival to day 7 from wild broodstock eggs was additionally concerning. We also did some follow-up assessments of egg quality and survival to yolk-exhaustion in larvae from these groups and discovered that we were seeing differences in day 3 (yolk exhaustion) survival depending on the age of the broodstock. Day 3 survival from our oldest animals was <50% (when normally it is ~80%). Alternately, survival to day 3 from our younger wild collected fish was about what we would expect at 75%.  Therefore, we need to further examine these differences in egg quality between age groups as clearly it is affecting results of our larval trials.

Despite low survival, we are pleased to report that we were able to still successfully rear some of the F2 larvae through to juveniles (August 2019) and have now fully closed the life cycleon Yellow Tang. This marks the first time that F2 surgeonfish of any kind have been produced in culture. This marks another tremendous milestone for marine ornamental aquaculture.

To complete Objective 4 and determine the effects of light source, spectrum and intensity on feed incidence and survival to day 7 post hatch, we designed and constructed a 200L test system comprised of (9) replicated 200L tanks that have either LED or compact fluorescent lighting fixtures.  Each tank is isolated using black plastic on all sides so that it can only obtain light from the dedicated lighting fixture above. A movable front curtain allows the technician to access the tank daily, with minimal disturbance. The first trial (stocked with wild-collected broodstock eggs from the 3 groups combined) tested the new LED fixtures compared to existing compact fluorescent fixtures that we have used over the past several years.  This trial was stocked and managed as described in the prior Objective. The LED fixtures were initially set to match both the color and intensity (lux) of the existing compact fluorescent fixtures.

Unfortunately, as described in Objective #3, larval survival was also very poor in this trial and the trial was discontinued on day 5 post-hatch. There were no discernable (significant) differences between treatments, although survival in the LED treatment was a little higher (5%) vs. the survival in fluorescent treatment (3%). Since there were no obviously negative affects observed using the LED lights compared to the fluorescents, we will move forward using these lights as the source of lighting for further spectrum and intensity trials. It is worth noting these lights have been used on other larval tanks in our hatchery with good results (we have used them to rear both grouper and yellow tang in larger tanks). However, before these additional lighting trials can commence, we need to further investigate and mitigate the confounding effects of egg quality in order to effectively evaluate these other treatment differences.

Looking forward to the coming year, the project will address its Year 2 objectives and the Year 1 objective to investigate alternative small, non-elusive prey items that may enhance feeding and survival post first feeding. Prior work on this area has shown that collection of wild zooplankton in the correct size range for Yellow Tang is very difficult and often unpredictable. It was concluded during Year 1 that we should not pursue wild zooplankton collection for this objective, but rather should focus on various ciliates (or other prey) that could be easily cultured as a potential supplementary food source as suggested by Burgess & Callan (2018). This work will proceed in the next project year (Year 2).

Year 1 of the project has demonstrated reliable, year-round production of viable eggs from Yellow Tang broodstock. It has also provided important information regarding the onset of maturation in F1 Yellow Tang stocks and is beginning to elucidate egg production information from those unique stocks. This work to date also resulted in the complete closing of the life cycle for Yellow Tang, producing the first F2 juveniles in August of 2019 and thus charted another important milestone for marine ornamental aquaculture. This project sought to improve early larval survival (beyond day 7), however was hindered by unexpectedly low egg quality from long-time, well-established stocks. Despite this, progress has continued with the culture of Yellow Tang and egg quality issues will be further addressed in Year 2 of this work along with re-visiting some of the Objectives that could not be fully explored from Year 1.

Despite this, progress has continued with the commercial-scale culture of Yellow Tang. A concurrent project at OI supported by industry partner (Biota Aquariums) is producing as many as 500 Yellow Tang juveniles from a single 1,000L larval tank. However, overall yield still remains quite low (around 1% survival from stocking). Therefore, egg quality issues will be further addressed in Year 2 of this CTSA work along with re-visiting some of the Objectives that could not be fully explored from Year 1 in order to further improve commercial production potential for this species.