CTSA Project Summary: Presence of O. niloticus and Fno in feral populations of tilapia in Hawaii

CTSA Project Summary: Presence of O. niloticus and Fno in feral populations of tilapia in Hawaii

The Hawaii Fish and Game Division and the Federal Bureau of Commercial Fisheries (now called the National Marine Fisheries Service) introduced several species of tilapia to Hawaii for food production, weed and pest control, and for use as live baitfish. Mozambique tilapia (Oreochromis mossambicus), greenhead tilapia (O. macrochir), redbelly tilapia (Tilapia zillii), redbreast tilapia (T. rendalli), and blackchin tilapia (Sarotherodon melanotheron) became established in natural bodies of water in the 1950s and 60s after intentional release or accidental escape (Brock, 1960, Szyper et al., 2000). Starting in the 1970s, a number of different species and strains of tilapia (blue tilapia (O. aureus), red strains and hybrids of Mozambique tilapia, and hybrids of Nile tilapia, O. nicloticus) were introduced to Hawaii for food production (Szyper et al., 2000). In 2000, a statewide survey involving farmed and feral tilapia conducted by Szyper et al., revealed that six species and five hybrids species of tilapia were present in Hawaii. The identified fish were outperformed in terms of growth when compared to Nile tilapia, and poor genetic stocks were seen as the limiting factor for Hawaii’s tilapia industry (Szyper et al., 2000). Despite the presence of the introduced species in the state, only three species (blue tilapia, Sabaki tilapia (O. spilurus), and Mozambique tilapia) were permitted entry for private and commercial use until 2017, when restrictions on the importation of Nile tilapia were lifted.  Despite arguments that the Nile tilapia was already established in the wild, the approval process for the importation of Nile tilapia for aquaculture purposes took nearly twenty years due to environmental concerns.  Nile tilapia is cultured extensively throughout the world due to its fast growth rate, high fecundity, and tolerance to a wide range of environmental conditions. However, these same attributes are what make the species invasive in environments to which it is not native (Pullin, 1998; FAO, 2010). A statewide survey was conducted to substantiate the claim that Nile tilapia were already present in feral population of tilapia throughout Hawaii. 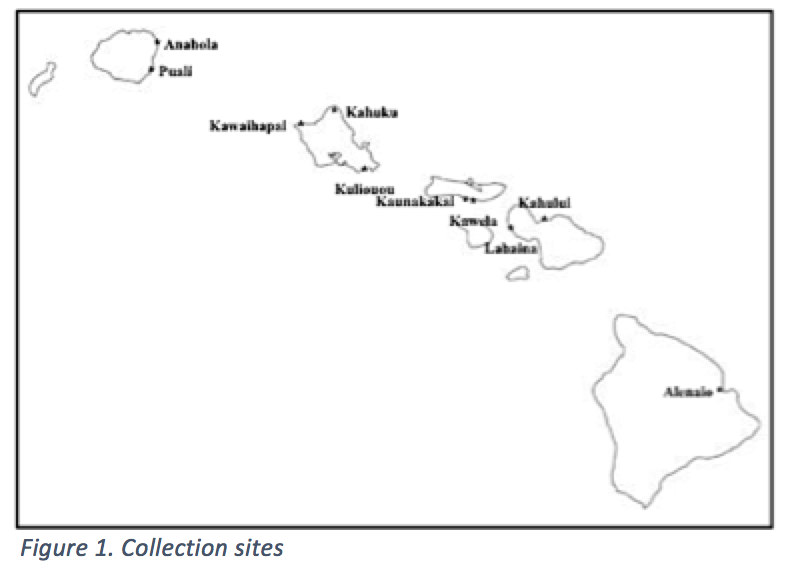 In 1994, unexplained mortalities occurred in cultured and feral populations of tilapia on the island of Oahu (Mauel et al., 2003). The disease-causing agent was found to be a bacterium, Francisella noatunensis subsp. orientalis (Fno) (Mauel et al., 2003; Szyper et al., 2000). To prevent its spread, the state issued a moratorium in 1998 (PQ Policy 98-09, Section 150A-8, HRS) on moving tilapia species from Oahu to other Hawaiian Islands. In 2010, tilapia on the islands of Kauai, Oahu, Molokai, and Hawaii were tested for Fno by a polymerase chain reaction (PCR) assay in a study conducted by Klinger-Bowen et al. A single farmed fish on the island of Molokai tested positive for the pathogen. The results suggested that the disease was mostly confined to the island of Oahu; however, sample submissions from neighboring islands were few. It was still unclear if the moratorium prevented the spread of Fno. A survey was conducted to determine the pathogen’s geographic range.

Feral tilapia were collected from ten sites across the islands of Oahu, Molokai, Maui, Kauai, and Hawaii between November 2017 and October 2018 (Figure 1, Table 1). From each site, twelve to thirty fish were collected via angling and cast netting. Collection sites were chosen according to historical data provide by Mr. Thomas Iwai. Once collected, tilapia were euthanized and transported on icepacks to the Hawaii Department of Agriculture Veterinary Laboratory. The fish were grossly examined for lesions, measured, weighed, and sexed. Fin clips were taken from each specimen and preserved in ethanol for species identification. Additionally, samples of spleen were collected for Fno detection by real-time PCR assay, culture, histology, and microscopy. 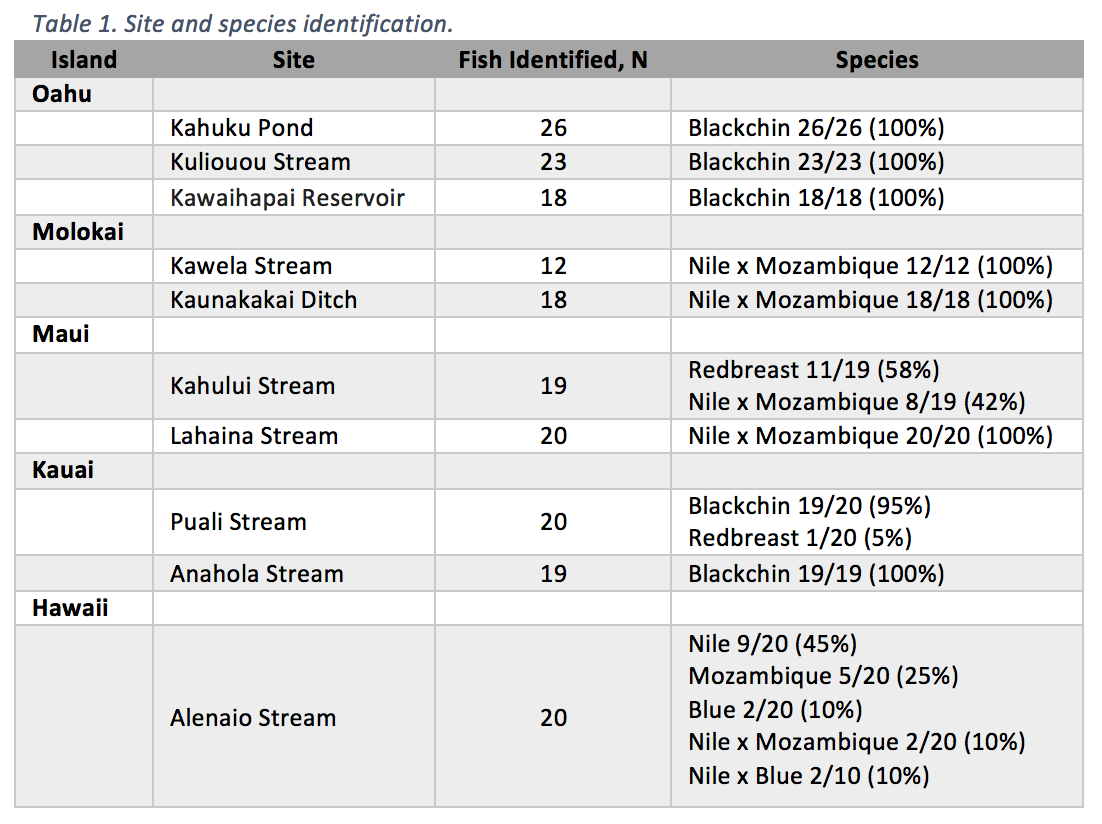 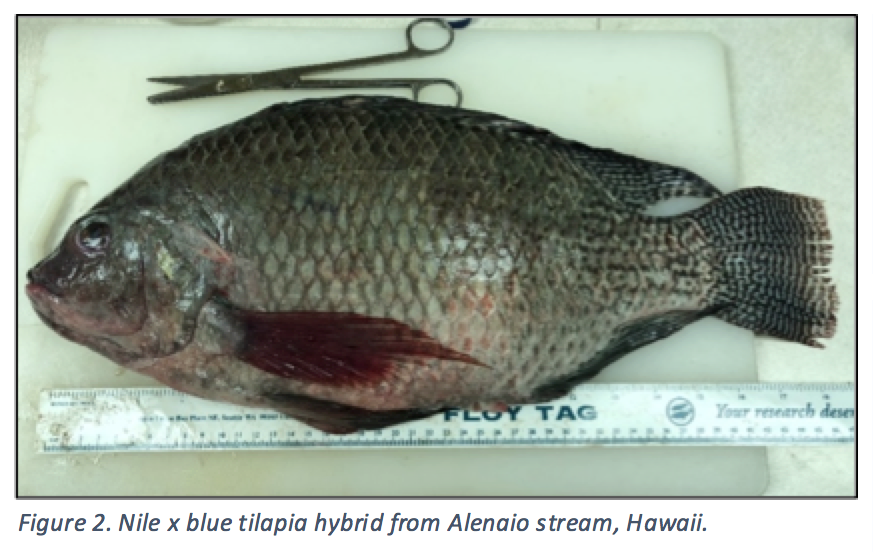 The real-time PCR assay was able to detect Fno as low as 0.001 ng/μL of bacterial DNA. The pathogen was detected in fish collected on Oahu, Maui, and Kauai. Granulomas formed by inflammation were observed in fish spleens at three of the four sites that were positive for Fno. Five other sites had fish that showed granulomas (Table 2, Figure 3), but were negative for the real-time PCR assay. Possible causative agents include Mycobacteria and Nocardia species. All samples of spleen were negative for Fno growth on the recommended culture medium. 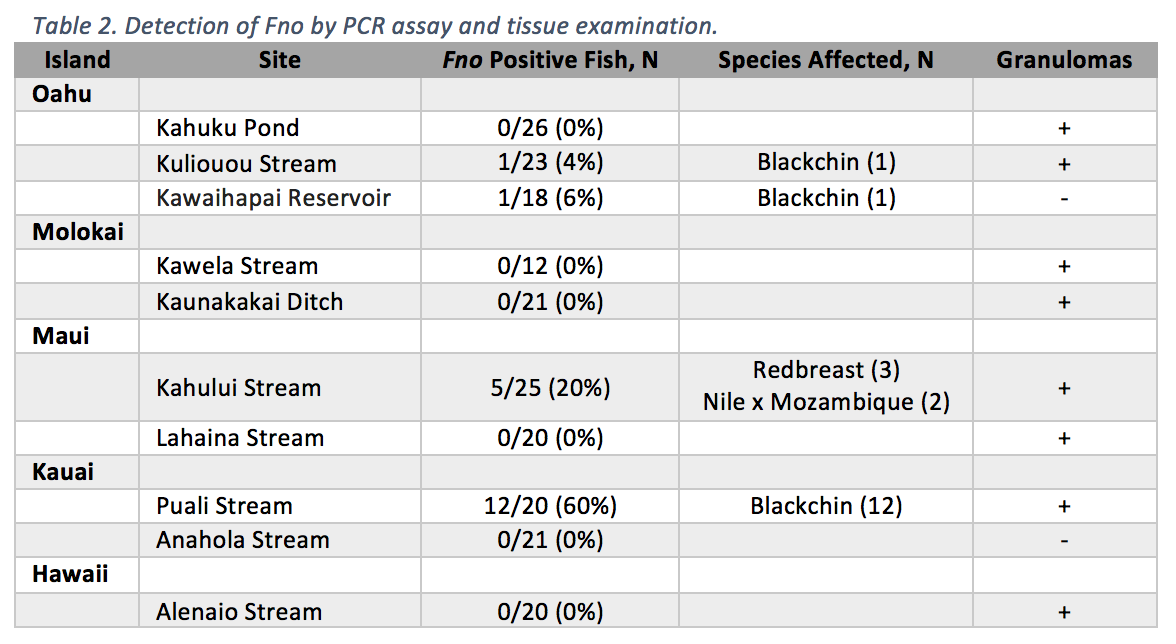 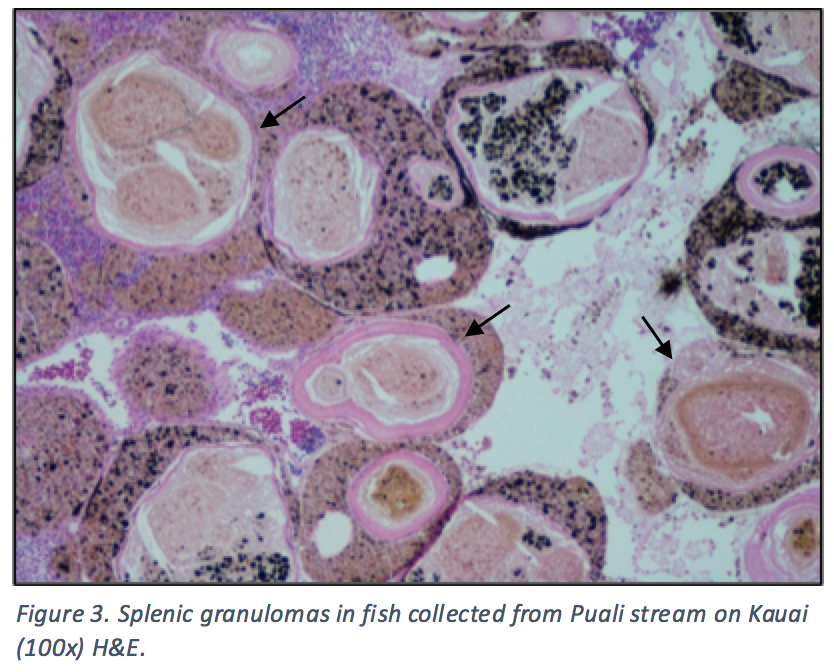 Nile tilapia and hybrids are present in streams on the islands of Molokai, Maui, and Hawaii. It is possible that the Nile x Mozambique tilapia hybrid is a descendant of fish introduced in the 1980s from Taiwan (Szyper et al., 2000). It is also possible that the Nile x blue tilapia hybrid found on the island of Hawaii is the descendant of fish imported from the mainland U.S. in 1995 (Szyper et al., 2000). It is unknown when and how pure Nile tilapia was introduced to Alenaio stream. There was no documented importation of Nile tilapia into the state at the time of this study. Interestingly, Wu and Yang (2012) also identified the species in a stream in Hilo.

Although Nile tilapia is established in streams in Hawaii, one must consider that there can be differences within a species due to improvement by selective breeding. A 1990 strain of Nile tilapia will easily be outperformed by an improved 2020 strain in terms of growth, fecundity, and disease resistance (Eknath and Hulata, 2009; FAO, 2019). Therefore, it is impossible to say that new strains will not have an impact on stream environments. Precautions should be taken to prevent accidental escape of Nile tilapia.

Francisella noatunensis subsp. orientalis was detected in feral tilapia from the islands of Oahu, Maui, and Kauai. Individual fish that tested positive were blackchin tilapia, redbreast tilapia, or a Nile x Mozambique hybrid. It is well known that Fno affects feral populations of blackchin tilapia and cultured Mozambique tilapia on the island of Oahu (Klinger-Bowen et al., 2015; Szyper et al., 2000; Soto et al., 2013). The moratorium on tilapia movement was not successful in preventing the spread of disease to feral populations on Maui and Kauai. Although Fno was not detected on the islands of Molokai and Hawaii, its absence is uncertain, since few sites were visited. A second study should be performed to determine if Fno is present in cultured fish on Molokai, Maui, Kauai, and Hawaii, since the PQ Policy 98-09 is meant to protect tilapia producers on neighboring islands. That information may be used to reconsider the restriction on intrastate movement of tilapia.

The project team gratefully acknowledges the support of the Center of Tropical and Subtropical Aquaculture, Hawaii Department of Agriculture Animal Industry Division, University of Hawaii at Manoa, and Hawaii Division of Aquatic Resources.