The culture of high value marine fish (such as grouper) is rapidly expanding in Asia. In particular, the high demand for live grouper in the Hong Kong market commands wholesale prices of up to US$100 per kilogram. Groupers have been cultured in South East Asia for over 30 years, yet current culture methods still face very low hatchery survival (~1%) in some of the most commercially important species, such as the coral grouper Plectropomus leopardus, largely due to inadequate larval feed items. Copepods have been found to significantly improve larval survival in many grouper species but, due to their inherent production challenges, have failed to become integrated in most grouper rearing protocols.

To address this issue, CTSA is supporting the project “Establishing Coral Grouper (Plectropomus leopardus) Production in Palau through the Application of Intensive Copepod Production Technology,” which just completed it’s second year, to apply and expand intensive, copepod¬ based larval rearing technology developed at the Oceanic Institute (OI) at Palau Community College (PCC) hatchery facilities. The goals of Year Two of this project were to continue to monitor the maturation and spawning of recruited coral grouper broodstock, conduct a training workshop for local stakeholders on intensive copepod production, and to establish a feeding protocol for Coral Grouper larvae. We are pleased to report that all of these goals have been successfully accomplished.

At the conclusion of Year One, researchers successfully recruited Coral Grouper broodstock, but they had not yet started spawning. At the onset of Year Two, natural spawning began and the production of eggs has since been excellent. The fish began spawning in March 2016, producing over 3 million eggs in peak months. The mean number of “good” eggs (those that resulted in viable embryos) was approximately 170,000 per spawn. However, peak production of “good” eggs was over 500,000 in several spawns in the subsequent months. We currently have approximately 20 broodstock, divided equally into two tanks. The fish have continued to consistently spawn naturally each month, normally peaking around the new moon.

Coral Grouper larvae and fry have been successfully produced at the PCC hatchery from the naturally spawning broodstock. To date, larvae have been reared past day 7 numerous times, and three batches of larvae have been reared past day 30, at which point they settled as juveniles. In our best large-scale run, over 10,000 juveniles settled from 100,000 larvae stocked, indicating 10% survival was, in fact, achievable (currently survival in this species is around 1%). Unfortunately, shortly after settling, these fish rapidly died, indicating that either environmental or nutritional conditions were not being met effectively. In all attempts, the larvae were reared utilizing copepod nauplii as the primary feed. Researchers carried out a short-term feeding trial to test the effects of feeding with copepods, rotifers or a mix of the two prey types on growth and survival of the early larvae. Survival of the larvae to day 7 was approximately 16% in the treatment that received rotifers only and highest (17%) in the treatments that received rotifers and copepods mixed, which was significantly higher than the treatments that only received copepods (<2%). However, it is likely that the copepod densities used (<5/ml) in those treatments were not sufficient to properly nourish the larvae. It is notable though, that the fish that received copepods in addition to rotifers were significantly larger (4.27 mm at day 7) than those that received rotifers alone (3.12 mm on day 7). It was noticed that the fish that received only rotifers were developing very slowly, and were likely going to perish in the next week. Therefore, future protocols will continue to test the optimum combination of rotifers and copepods as prey. 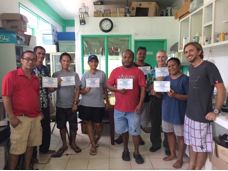 In January 2017, staff from OI traveled to Palau to assist in directing a hands-on training workshop for local stakeholders. This workshop focused on the production of microalgae and copepods for use in larval rearing. A total of seven local participants completed the training workshop, co-taught by the project PI’s. It is important to note that the local technicians at PCC Hatchery assisted in the teaching and training of the workshop participants, confirming that the knowledge and skills needed for this technology have been successfully and effectively transferred to this region through this project. During Year 2, it was observed that the period from day 25-35 of larval rearing was a time of high mortality and sensitivity in this species. Therefore, a large focus of Year 3 objectives will be to overcome the challenges associated with this weaning and metamorphosis period, so that large numbers (thousands to tens of thousands) of fingerlings might be successfully produced.
Loading...