The first objective of the project was to establish a nutritional database in the FeedServer data center of the Oceanic Institute of Hawaii Pacific University Aquatic Feeds & Nutrition Dept. This database holds all analyzed nutritional results for the local ingredients shown in Table 1, which include commercial feed ingredients such as fish meals from American Samoa and the Republic of the Marshall Islands (RMI), macroalgae byproducts (defatted haematococcus & spirulina), copra meal and cassava from RMI, and potential feed ingredients such as fishery byproducts, duck weed, azolla, salvinia, taro, and dehydrated food waste, among others. Analyzed nutritional composition includes dry matter, crude protein, crude lipid, ash, gross energy, amino acid and fatty acid profiles. Carotenoid pigments were also analyzed for macroalgae ingredients. 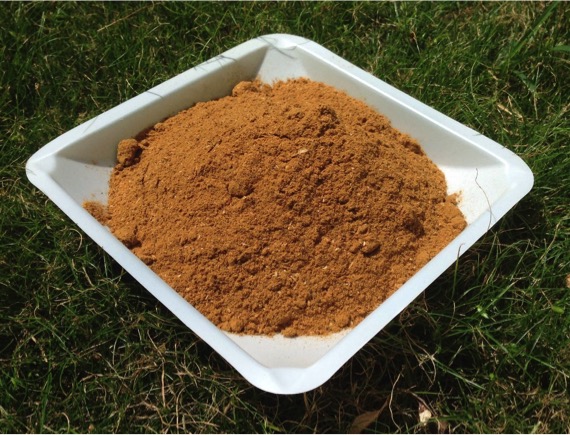 Upon completion of ingredient analysis, the second objective of the project was to develop scientifically sound feed formulations based on the local ingredients for tilapia and white shrimp. A tilapia diet was formulated using 94% local ingredients and processed at the OI feed mill. An 8-week feeding trial was conducted on juvenile tilapia (Oreochromis mossambicus) in 3-repitive freshwater and saltwater tanks in 2014. Results showed that specific growth rates of tilapia were 3.62 % /day in freshwater and 3.71 % /day in saltwater for the local-made diet; commercial feed achieved better growth rates probably because it contained higher protein and gross energy (44.0% and 4,628 Cal/g) than the tested diet (39.1% and 4,426 Cal/g).

Six shrimp diets were formulated and processed mainly using local ingredients for growth performance based on the previous growth trial and digestibility test. A 12-wk indoor feeding trial was completed for the six local diets plus a commercial Rangen feed on juvenile shrimp with three replicate tanks for each diet. This test obtained excellent shrimp growth rates (Table 2). All diets achieved over or equal to 1.0g/wk of growth, perhaps due to the utilization of black plastic tanks for the test. Many tests in previous years have used transparent glass tanks, and shrimp growth rates were generally less than 1.0 g/wk. The black tank provided a dark environment and might have reduced stress in shrimp and increase animal’s activity, which showed to be beneficial to shrimp growth.  Local diet-2 had similar protein content as commercial feed, and obtained higher weekly growth than the control and other local diets that had lower protein content, and contained the same local ingredients. The control diet was formulated with all commercial ingredients including Menhaden fishmeal and displayed the best growth performance in this trial.  In this trial, the pre-treatment (grinding) of the haematococcus, as well as the drying method (cold versus heat drying), did not show significant statistical differences on the shrimp growth performance. 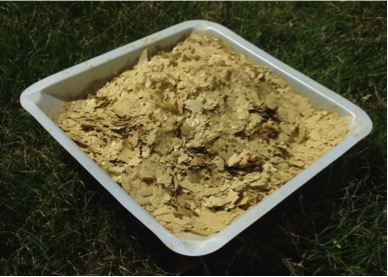 The tilapia diet and shrimp diet were formulated mainly using readily available local ingredients from Hawaii and the Pacific region that are in the proper condition for use in OI’s Feeds Research and Pilot Production Facility.  The microalgae co-products, defatted Haematococcus (pictured) and Spirulina (estimated cost =$0.45/lb) are being produced in Kona, Hawaii; fishmeal (0.52/lb), cassava meal ($0.20/lb) and copra meal ($0.07/lb) were from the Republic of the Marshall Islands (RMI).  The tilapia diet for the ingredient cost was estimated to be $0.40/lb and the shrimp diet-2 for the ingredient cost was calculated to be $0.45/lb. These trials demonstrated that using the local commercial feed ingredients offers a competitive price for local aquafeed development. 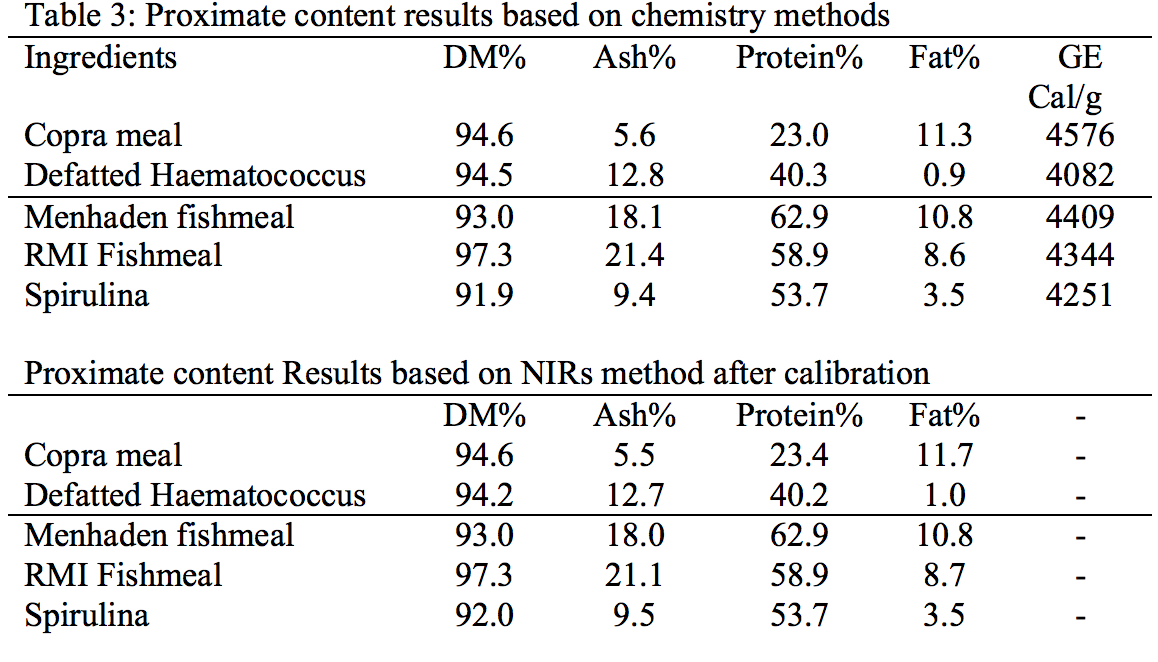 Once the feeds were formulated, the next objective of the project was to develop a calibration library of nutrient information for Near-Infrared spectroscopy system (NIR) as a fast and inexpensive tool to measure nutritional parameters in local ingredients and feeds. Four abundant and low-cost ingredients (local RMI fishmeal. copra meal, defatted Haematococcus and Spirulina) and commercial Menhaden fishmeal were repetitively analyzed for proximate composition using traditional chemistry methods recommended by AOAC, these ingredients were then subjected to NIR analysis; results are shown in Table 3. By matching the results based on NIR scan and chemistry methods, proximate results from NIR were adjusted and calibrated. A calibration library for the local ingredients was established for further analysis with NIR and several ingredients have been successfully analyzed by NIR method based on our current calibration according to the results of Nutritional Biochemistry lab.

The final objectives of this project were to disseminate project results and organize workshops to provide training and research updates on local feeds production for farmers, producers or researchers in Hawaii and the Pacific region. A local feed workshop was organized at the Oceanic Institute of HPU. Over 30 people including farmers, researchers, administrators, students and ingredient producers attended the workshop. Another workshop was organized in the Republic of the Marshall Islands by CTSA, ATMI, and OI, and was attended by local aquaculture workers. The project Principal Investigator presented research results on the nutritional composition of local feed ingredients and their application in shrimp and tilapia diets at both workshops. In addition, posters and abstracts were presented at the World Aquaculture Society conference in Las Vegas and regional feed meetings.

The establishment of local feed formulations is an important step towards achieving regional feed production goals. Utilization of local ingredients or byproducts will help the local aquaculture industry become independent of imported feeds and/or ingredients. The knowledge gained from this project will be useful for further research on tropical aquatic feed production.